It was 6am. The three of us stood anxiously at the finish line. 44 hours ago, a cowbell had signalled the start of the UTD160. A small crowd was  gathered, staring out at the mountains looking for the sign of the few remaining runners still out there. It was an hour from cut off. One of those runners was Garth. Garth and I had trained together. He’s my best mate and my wife’s cousin. UTD had consumed our lives for up to 5 months. Now we watched the sun rise, the second sunrise Garth had seen on this run. He had been out there for two straight nights.

We knew he had reached Cobham with enough time to make the finish before cut off.  From there it’s just 12km’s home. 6km’s of that, however, is rather brutal and tough to do on tired legs. Garth’s legs weren’t just tired. He was in pain. Soon after leaving the start line, an injury he had picked up in his knees in the final weeks of training began to flare up. It’s a runner’s worst nightmare; picking up an injury so close to D-Day, especially after hassle free training and a great deal of hard work and expense. Our eyes were peeled on the golf course which one runs down to finish the race. It was quiet and empty. All we could do was wait.

The last time I had seen Garth was at the bottom of Thabana Ntlenyana, the highest mountain in Africa, south of Kilimanjaro. At this point the runners starting their climb and the runners completing their summit meet up. I was finished my climb. He was starting. I had heard through friends when I got to the Black Mountain aid station that he was struggling with his knees and moving slowly. I knew he was in pain. It was tough to see him and to hear a bit of his struggle, but he remained in good spirits. If there is one thing I know about my mate, it’s that he has the grit and resilience to navigate tough terrain and get the job done. That was the last time I saw him.

Garth completed his summit and began the next phase to Sani Backpackers, at the top of Sani Pass. He reached the backpackers in the early hours of Saturday morning and then began the arduous run down the pass, moving as fast as he could to avoid running into the 100km runners who started at 5am, head up the pass, then turn at the top to join the 160km route. He took the turn off the pass a little before they reached him.  The remaining 20 or so km down to the 100km mark were, according to Garth, some of the toughest. It was also where he had some decisions to make. Garth’s strength is his meticulous planning and preparation. He knew exactly where he needed to be and by when. He was obviously way off his plan. He did the math’s and knew, that at this pace he was going to have a tough time making the cutoff. And he was in pain. He knew that this injury would not damage him long term, but was it worth pushing through? 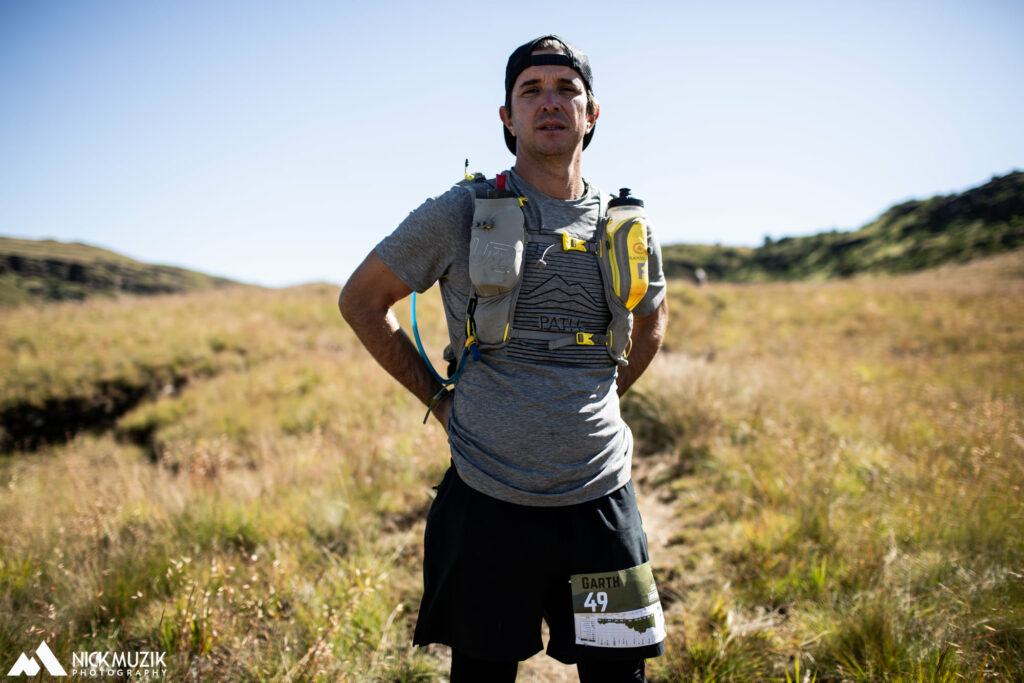 This wrestle is one those of us know too well when we are having to make a big decision that potentially means we let go of a dream. It is hard to let go of something you have worked hard for and invested so much time, energy and money into. Of course, sometimes it’s the right thing to do.  At other times, you simply need to dig deeper than you thought you were going to have to dig. There are so many pros and cons. There are other people’s perceptions. There is your ability to live with the decision. There are the ‘what if’s’ that you have to live with afterwards. Garth spent a gruelling few hours physically and mentally, weighing this all up in his head. He knew what he had put in. He also knew that he wanted nothing more than to stand at the awards lunch alongside all of those who had finished and ring that cowbell that we all received. That was a moment he had been dreaming about for a long time. All things considered, he resolved that this wasn’t his year. He was done and it was time to let go.

Then he arrived at the 100km mark and his tribe was waiting; Claire, his wife, and good friends Darryl and Vicky. It was 13h30. He had been going for 27+ hours. He was broken. The 100km aid station is the first aid station that most of those who are running will see their family and friends, unless they made the trek up into Lesotho. Being a supporter a at these events is hard work. Not only do you need to have everything your runner needs, but you also need to balance listening to where they are at along with not taking any excuses for wanting to throw in the towel. It’s also unwise to push someone who is injured. Garth’s tribe simply loved on him, supported him and asked him questions. He was figuring out his next steps with them. The wrestled was reignited. Perhaps He was not done?

Then a medic who had passed by to check on him after hearing him out, simply said ‘well, it’s a great day for a walk…’ That comment seemed to be the comment he needed to stand up on those legs. It was a beautiful day. Garth absolutely loves the Drakensberg. Claire was able to join him as a pacer for the next while. It was time to go for a walk in a beautiful part of the world with a loved one. He had reconnected to the story in a meaningful way and resolved to keep going.

Ahead of him lay 5 aid stations then the finish line. Those were now his mini milestones. It was time to tick them off. Before we started this race, we had both resolved that neither of us would run through two consecutive nights. We would both be home in time for a burger and a beer. He now knew that he would be facing up to a full night out there given his pace. He had to embrace the detour and see it through new eyes, let go of the old plan and pick up a new one. We all have the ability to do what we felt we could never do. And so he ran, walked and hobbled through the pain taking ground one step at a time. Only one barrier now stood in his way. Cut off. He knew it was going to be tough to make it within the 45 hours stipulated. He needed to be in by 7am the next day. He knew he could make it but not by much. Only time would tell.

Surrendered to the new plan, he kept going.

Once darkness fell, he chose to add in even more mini milestones; the green reflective markers. He moved as quickly as he could between each one, pausing when he got there to look for the next one.

I remember waking up at 02h30, my body sore, my eyes still desperate to stay closed. Toni, my wife, left with Claire to intercept Garth at Cobham, the final aid station. I looked out into the darkness and tried to comprehend what he was going through. It was tough to know he was out there alone, especially because I knew the terrain he was covering. Toni and Claire returned to say he had passed through and was pushing hard for the finish.They returned and we prepared to go to the finish.

And then we saw someone running like their life dependent on it. We didn’t know at the time that Garth’s watch had died a few kilometres from the finish. He had no idea if was going to make cut off. It was 06h30 when we saw him. A half hour to go. He was going to make it! What we were witnessing was the finish of an incredible journey, one which saw a man we all love dearly dig so deep and fight through challenges to overcome. I realized then I want to watch my friends overcome and achieve great things. This moment was more than epic. 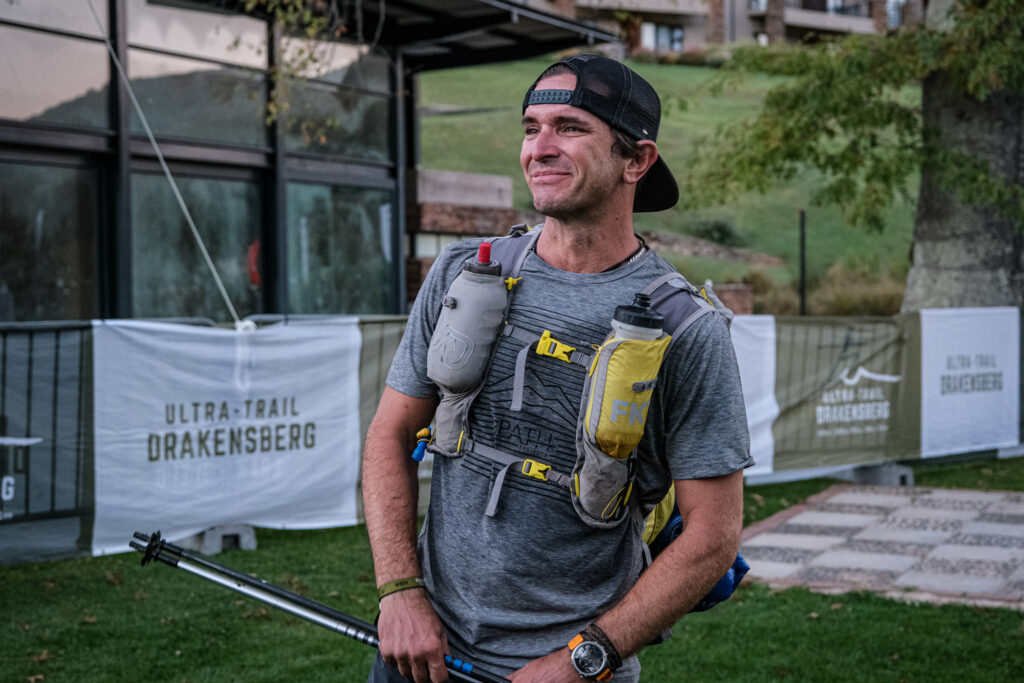 When he got closer I saw him wipe his eyes as he dealt with the emotions. Claire, his wife, bounded out toward him as he neared the finish line. Everyone cheered him in, watching Claire run into his arms. The tears flowed. I could see how drained Garth was and the toll this had taken on his body. His relief was palpable. The beer went down in a heatbeat!

Ryan Sandes, the winner of UTD160, had completed the run in 22 hours, half of the time it had taken Garth. What Ryan did was unbelievable, requiring incredible mental and physical strength. His run was something to behold. What Garth was about to do was unbelievable, requiring incredible mental and physical strength. His run was also something to behold. His run was proof that sheer grit and determination can see you to the finish line no matter what. I know he will be able to draw from this experience as continues to push his limits and live outside the comfort zone. He has done something that many people will never experience… endure 44 hours of pain and challenge to achieve what he set out to achieve. I really do respect what he did out there. His finish represents everything we stand for at The Middle; endurance, resilience, grit, resolve, commitment to goals, overcoming challenges (day 5’s), maintaining a healthy perspective, embracing the detour, dealing with failure and the power of tribe.

It was, and will always be, one of the most significant journeys we will ever get to witness. May it remind us that we were all made for tough terrain and that we can defy all odds and reach the finish we set out for ourselves. 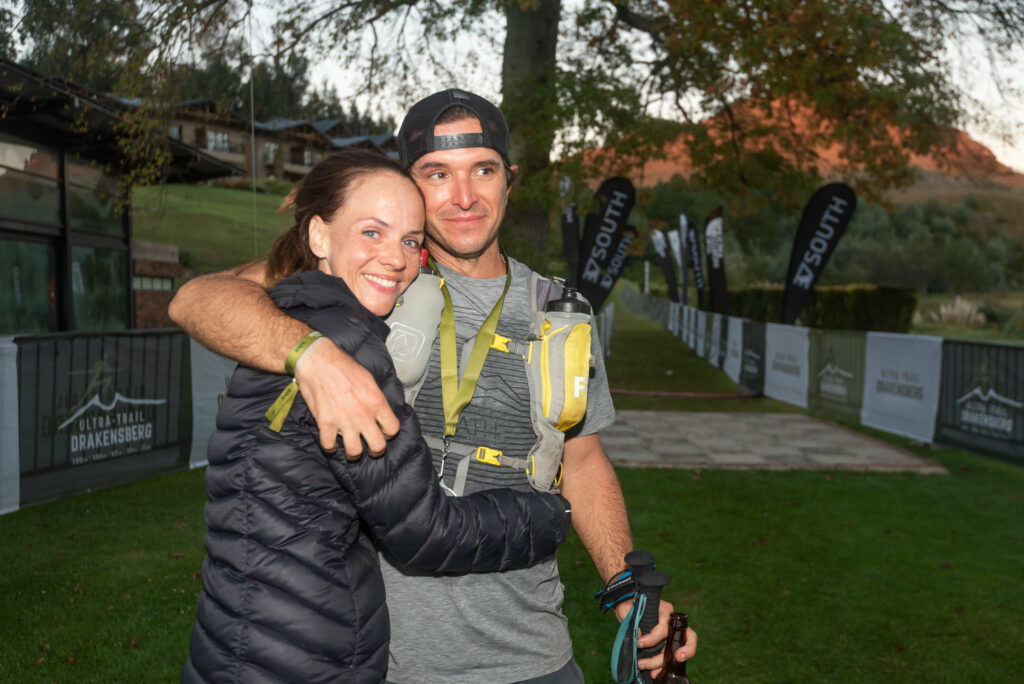