Finding Space in the Pondoland

At 04h00 I listened to the voice note from Chris, a friend of mine who had invited me to join him on a MTB ride from Mboyti to Port Edward through the Pondoland. Having hiked and run this section a few times before I was keen to experience it by bike, a sport I have recently gotten back into. The voice note did not bear good news. Chris was out. Having recently contracted COVID, Chris was yet another casualty of pandemic’s impact on the things we love to do. So instead of heading up the hill to fetch him, I pointed my car south and headed for the Wild Coast Sun, our meeting point to start the trip. With Chris out I was ace up. He was the only familiar face on the trip. I was now joining a group of strangers for a 6-day trip. A mixed crew of young and old, mostly men, rocked up to the car park, bikes and bags in hand. Gareth, our tour guide, organised out bikes onto trailers and soon we headed off through the rolling hills of the eastern Cape.

As we drove further into the open spaces of the Transkei, I realised how much I needed this trip. With the stresses of COVID and business, it had been a while since I broke away into open space. Those reading this may be saying ‘but you are away often’ and I am… but that’s because I believe we need to disconnect from the daily grind regularly. A while in this case is two months. I believe thats far too long. Our taxi drivers dropped us off at the Magwa Tea Plantation. We were around 30km from Mboyti and probably 100km from our cars. In order to get back to them and back home, we simply needed to peddle north. I revelled in the fact that my stead was the only form of transport I would be using for 6 days. 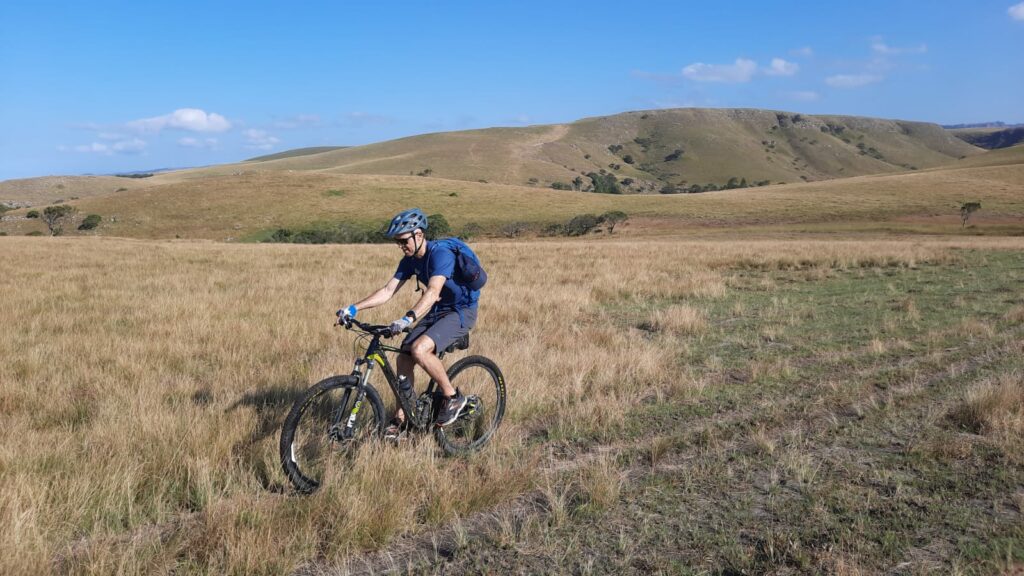 A bicycle is a great way to travel. You feel connected to the earth (literally at times!) and the people you pass. It is a quiet form of transport. It is free and relies only on manpower. And it’s something most humans can do with little training.  Gareth believes firmly in supporting local businesses so this trip would be authentic all the way through to the finish.

Admittedly, as we started off, I was apprehensive. Firstly, I had recently gotten back into biking and was hoping I would not be holding this crew up with the lack of bicycle fitness or skill. The fact that it was a relatively short distance each day put my mind at rest. Secondly, I had no idea how I would get on with everyone and what the next 6 days would look like. Joining a new tribe can feel risky and uncomfortable. But, as I reminded myself, too many of us stick to who and what we know… constantly… robbing ourselves of new experiences with new people. Judging by the taxi ride down, I was in great company and as we started riding, I knew I would be ok. That was until the steep concrete hill that winds its way down to the small coastal town of Mboyti. I had both hands on the brakes, determined not to start the trip off with roasties.  Some of the guys on this trip had no fear at all, punishing it down the hill with reckless abandon. It was inspiring to watch. I would need to develop confidence and take my riding to the next level.

As the sun set on a cold and wet day, I realized how much I enjoy these types of adventures. Karkloof100 and UTD160 had been epic adventures, but they also include formality, set times, set distances and a set route. This adventure includes no timing, race numbers or set route, jus the flexibility to do go where the path leads, changing things up as we go. It felt good to be travelling by human power again, something I have really grown to thrive on over the past few years. 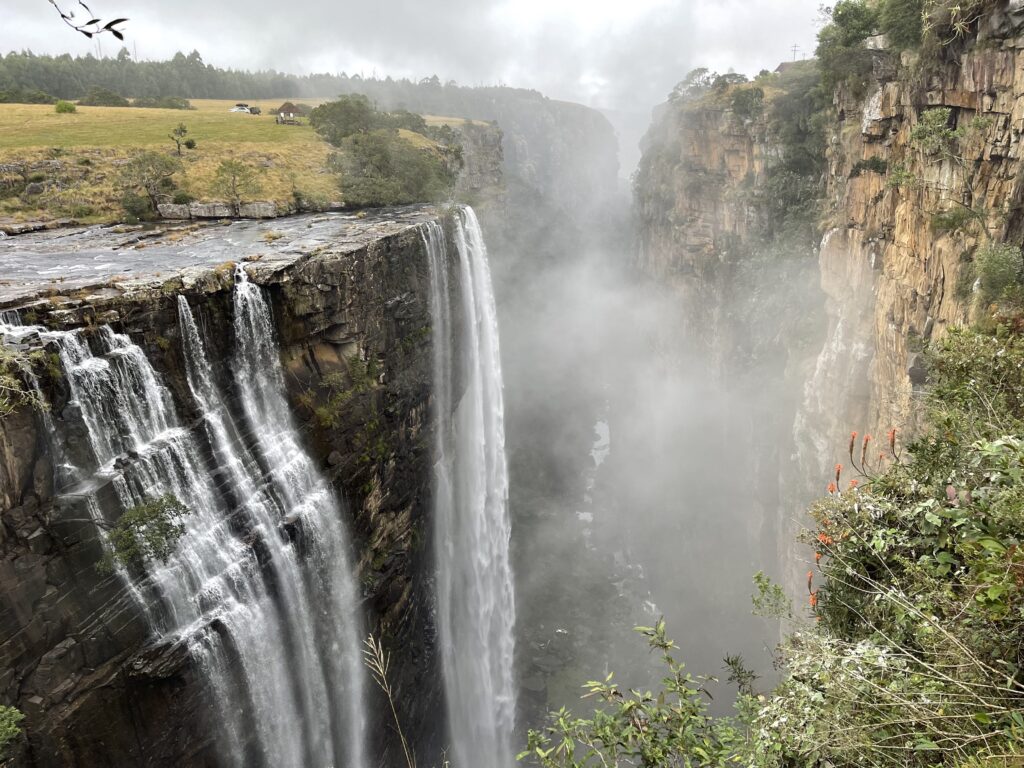 On the second day, as we rode down onto a vast open beach, I started to pay attention to my soul. I have often heard people proclaim that adventures such as these are ‘good for the soul’. I reflected on what that meant. There appeared to be a strong connection between my feeling alive and the vast open space before me, along with the tribe of people I was with, the atmosphere and the sense of unknown which lay before me. My soul was responding to adventure as though it was plugged into a fuel pump, filling up after a long drive. I could feel my senses reawaken. I could feel the lightness return to my shoulders. I felt deeply satisfied.

Adventure is not a luxury. Our souls need space. The physical space around me seemed to activate a sense of space within me. I thought back to where it all started for mankind. We lived outdoors, in the garden, in the wilderness. Now we are boxed into suburbs and estates, and work within office parks. Of course, that is sacred and what it means to be a human in the 21st century… but we must find space in order to revive. We must find space to reconnect with our story, to refresh and refocus and to refuel. There is something so simple yet profound about breathing in fresh air and staring out into new horizons.

The next 6 days was a combination of single track, jeep track, rocky portages, river crossings, black label quarts in local shebeens, good food, tricky downhills, long uphill’s, flat blue oceans, crystal clean rivers, whales, sardines, huge pods of dolphins, waterfalls that fall into the sea, rocks that look like cathedrals, 17km beach rides, good conversations, loads of laughing, watching people fall (or score a try as this crowd like to call it!) and learning about how to maintain a bike. It was epic. As each day went on, I found myself getting deeper into the experience and further away from my reality at home. With limited cell phone reception, I had little contact with home and work, aside from a few calls to my family. My wife has often referred to me as being ‘busy… busy in my head!’. Physical space has a way of opening up headspace. Space affords you the opportunity to think without all the usual clutter. In those contexts, it is interesting to pay attention to where our minds naturally drift. What or who do we think about? It’s a chance to reprioritise. It’s a chance to remind oneself of what’s important and sacred. It’s a chance to let go of the mundane, of the irrelevant. It’s also a chance to temper the addiction to technology… 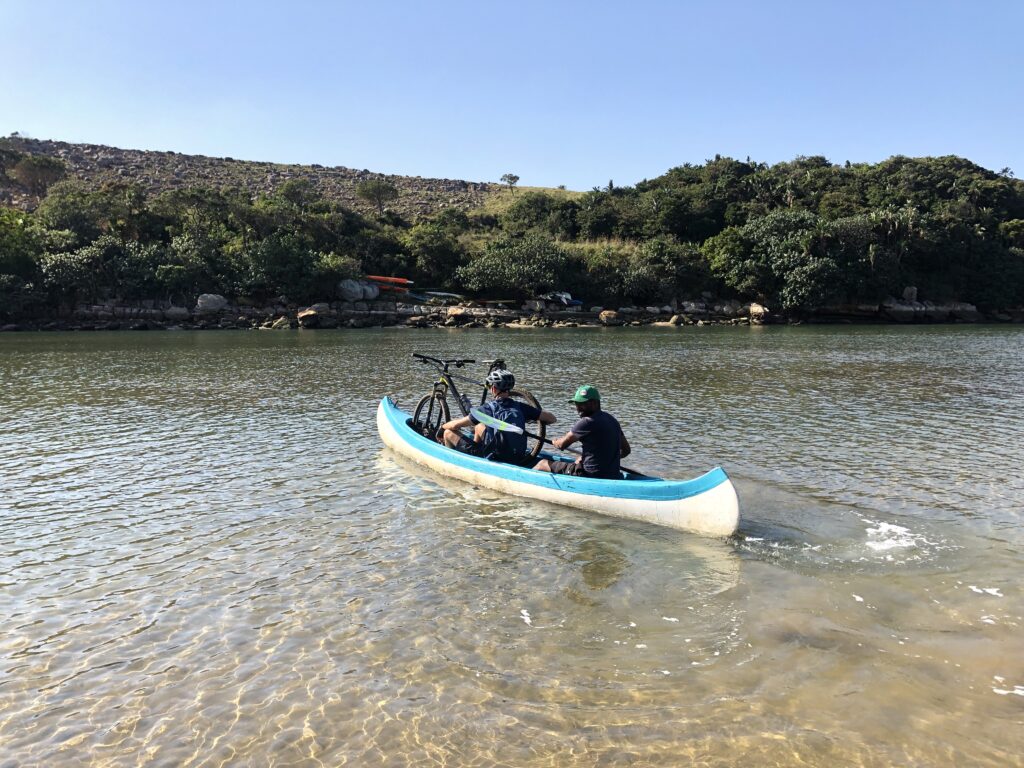 When we arrived in Msikaba we discovered, through our phones, that a new cell phone tower had been installed. I watched as the tech drew us away from each other and toward our devices. It wasn’t hectic, but just noticeable. The next day the tower was down. I was grateful. After the fourth time I glanced at my phone and lit the screen, I realised it was futile and packed the phone away. Only then can we surrender to what and who is around us and be fully present. Now that I am home, I am aware of how jarring and invasive technology can be, albeit it necessary to live our lives. Every now and then we just need to live disconnected.

As I became more aware of my surroundings, I also became more aware of how the adventure was growing my confidence. As I mentioned, I had my doubts about my ability to keep up with the crew or navigate the terrain by bike. But as the days went on and I tackled the hills, my confidence grew, and I started to enjoy the riding more and more. The space adventure affords us is the space outside of our comfort zone. We need to go there periodically to learn about ourselves. The stretch is good as it also forces one to be present in what they are doing right there and then. I was fixed only on the terrain in the more difficult sections and nothing else. I would have all the good endorphins rush in when I hopped over a rock or took on a steep downhill or pushed through some soft sand.

When last did you step into the space adventure provides? How long have you been driving the same roads, doing the same route, looking at the same laptop, phoning and hanging out with the same people? Those things are all good… they just need the enthusing of adventure and space, as it is, as everyone says, food for the soul.

I am now back to reality, figuring out what to do about POPIA and everything else that comes with growing a brand. When it’s all getting a bit hectic, I can close my eyes and remember a moment I lived in the Pondo and claim the emotional space that the memory offers up.

Adventure is equipping me through The Middle of all contexts in incredible ways.

If I go again will you join me?